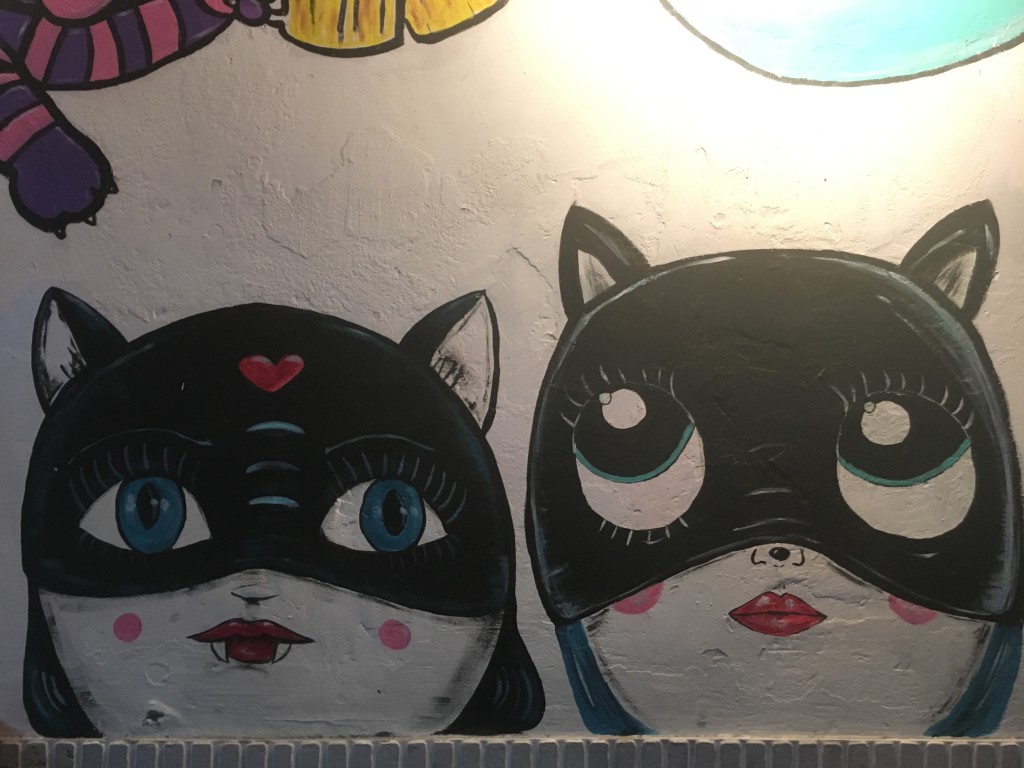 People Who Inspire Vol.1: A STORY ABOUT ONE VEGAN MAN

(Owner of Cat-Bar in Barcelona)

It’s been a week since I moved to Spain and currently I’m staying in Barcelona. I love the positive energy of the city and its colourful diversity. No surprise, that it’s the place where dreams come true and people from all over the world come here to follow their heart. Everybody has a story to tell and some people encourage and give us confidence to move towards our most insane dreams – simply by being a living example.

Last week I went out alone. The destination was a wonderful vegan meet-up and at this gathering of like-minded people, I met a man who inspired me to include his story into my writing. We accidentally ended up on the same table and had a simple chat about vegan places in Barcelona and vegan food itself. This humble, funny, open, charming, vegan guy turned out to be the owner of one of the most popular hip, tasty and vegan restaurants in Barcelona, called “CatBar“. I asked him if he would open up and tell his story. We met for a beer and a chat in his beautiful burger restaurant. I never did interviews before and storytelling is new to me.

His name is Roy.

Roy always wanted to open a food place and serve vegan quality food. In 2008 he decided to give up his good job, after meeting the right person, in the right place, in Madrid – a woman with the right mind-set. Being drunk in a bar in Madrid, they made a decision to open a vegan restaurant. Even if the idea to actually make it real seemed rather insane – the girl was totally convinced that “it’ll work and, hey, will make money”. They decided to do it in Barcelona, because it’s an open-minded city and one of the most attractive cities in Europe for world- travellers and tourists.

They immediately started to implement the concept. Roy was awareabout the difficulties, when he has finished the first calculations and 4 years passed until it started to make money. All the money they earned before —— just covered the staff, rent and products. They spend all of their time, dedicating themselves to the place. Both always stayed positive that things will go well. And apparently they did.

Since 2009 Roy is based in Barcelona. His business-partner moved to Stockholm and is a manager of another vegan place there. They are close friends and his eyes were sparkling when he spoke about her. This is the role-model for the best kind of business-partnership – a team. Two people who are inspired by each others ideas and personalities and want each other to succeed.

But what is behind all the free-minded lifestyle of a vegan restaurant owner in the heart of Barcelona? Years of experience in gastronomy and culinary? Years of planning?

Roy was born 1959 in Barrow in Furness, England and worked as an electrical design engineer for 33 years. In the year 1975 he left school and started to build submarines and war-ships for British navy, until 1989, then he used to travel a lot to work and live all over the the UK and Europe. His impressive life- experience includes cities likeMadrid, Munich, Hamburg, Linköping, Tel-Aviv, Toulouse, Milan and more.

In 1975, being only 16 years old, he discovered one of his biggest passions: riding a motorbike. The next passion he has is music. It’s not a surprise, that he has two pianos in his restaurant and musicians play and sing there occasionally. Music actually made him a vegan. One day in 1982, he bought a record of a band punk- rock called Crass, who were advocating animal rights, and in the record he found propaganda leaflets predicting “mad cow” disease, and about animal rights and this was the moment where he decided not to eat meat anymore. He went for the pesceterian diet and in 1985 a complete vegetarian, but mainly vegan diet, after learning to cook at the www.vegsoc.org

In 2007, when he was working in Liköping, Sweden, pizza was the only vegetarian alternative, so he ate pizza most days and at a certain point he got fed up of cheese. Too much cheese. That was the easy way to overcome the barrier, which every single vegan had to face: giving up cheese.

Roy also gave me valuable advise on business and explained that it’s important to focus on one thing and make it great, instead of offering too much and be average. For people like me, who aren’t quite sure which of many passions they would like to pursue and who would like to live a life out of the box, he also suggested to save enough money to be able to survive for six months without a income and go try different jobs (in different cities). That’s practically what I’m doing now. Six months aren’t long compared to a life-time and it’s easy to find a simple job everywhere to make a living. I could’t imagine, that I ever will have the courage for that but here I am. Yes it’s scary, though it’s only possible to learn and understand something by actually trying and doing it. Theory doesn’t cost a thing when it’s not applied in life.

Roy inspired me so much with his simple philosophy: “motorbikes, beer & vegan food”. It was never chasing the money – everything he did was for passion and in order to learn and grow. He opened his first restaurant at 50 and told himself, that if this won’t work out within five years – he’ll go back to his old job. Isn’t this amazing? He wasn’t expecting an over-night success, nor an easy road. And here he is – looking amazing, feeling amazing, having an incredibly warm energy and being totally fun and humble person. He takes things easy and just realized a dream he had. Roy is a living proof for a creator. He created the reality he wanted to have. His life philosophy became his reality. He is a multi-passionate, open-minded, totally humble and fun human, who gave me the confidence and the right attitude to follow my own heart and trust the flow.

“CatBar” was the joint second vegan restaurant in Barcelona, but the original has now closed. The menu was bigger at the beginning, and they used to offer raw vegan food, but nobody was buying raw vegan food just a few years back. Though, the vegan burger were so popular, so the it was out of question where to put the accent.

Besides the incredible, creative, delicious burgers – the place is filled with positivity, great vibes and inspiring energy. The unique decoration, the little tables, the guitars on the ceiling, the motorcycle at the entrance, the romantic second floor, the cats on the walls – everywhere are small and tasteful details.

If you love what you do, if you commit to your dreams and you go for what your inner calling is – there’s no other option than to succeed. No matter the age, no matter the financial situation, no matter WHAT.

I love Barcelona.
P.S. Try the hemp-burger and ALL BEERS. 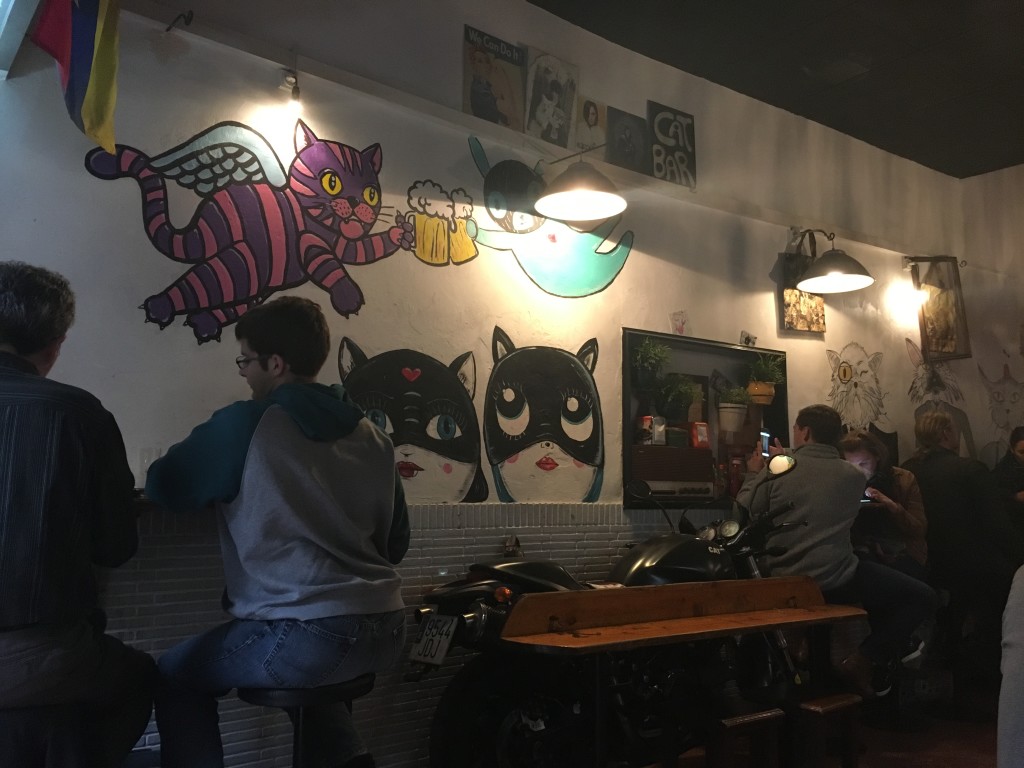 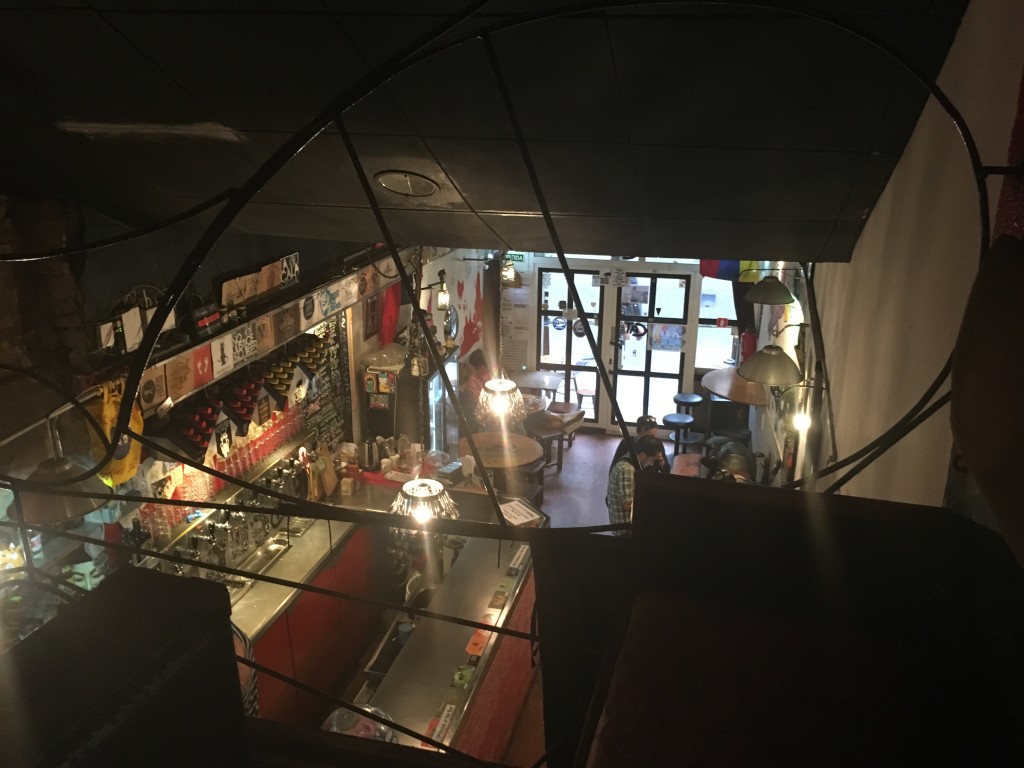 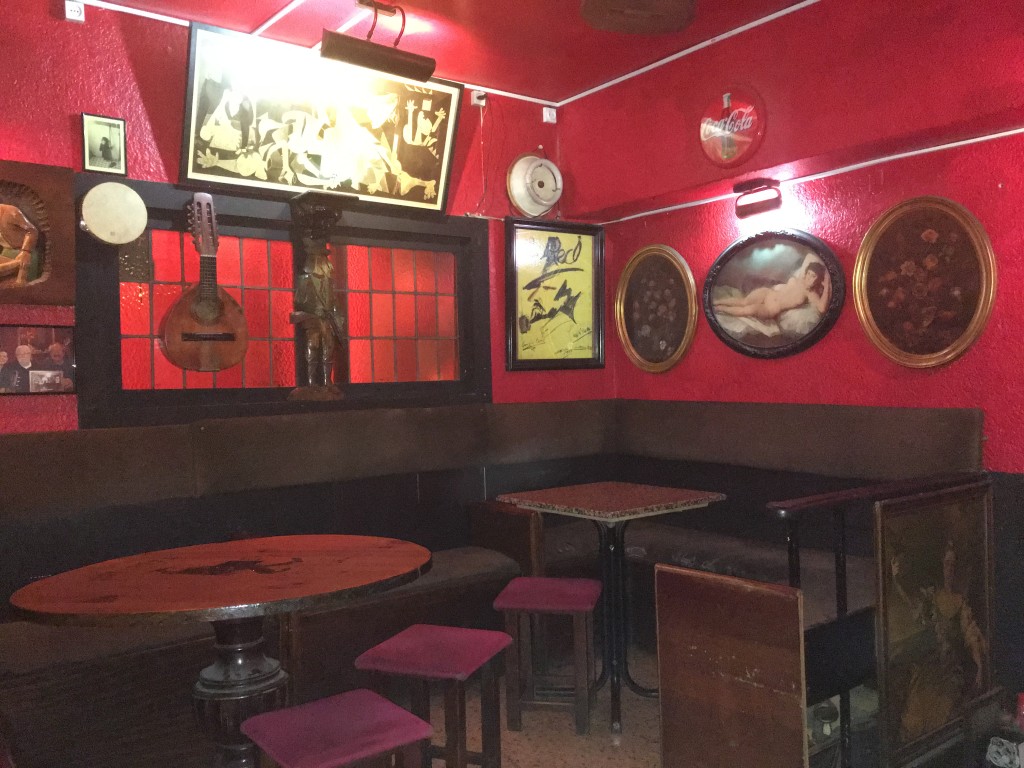 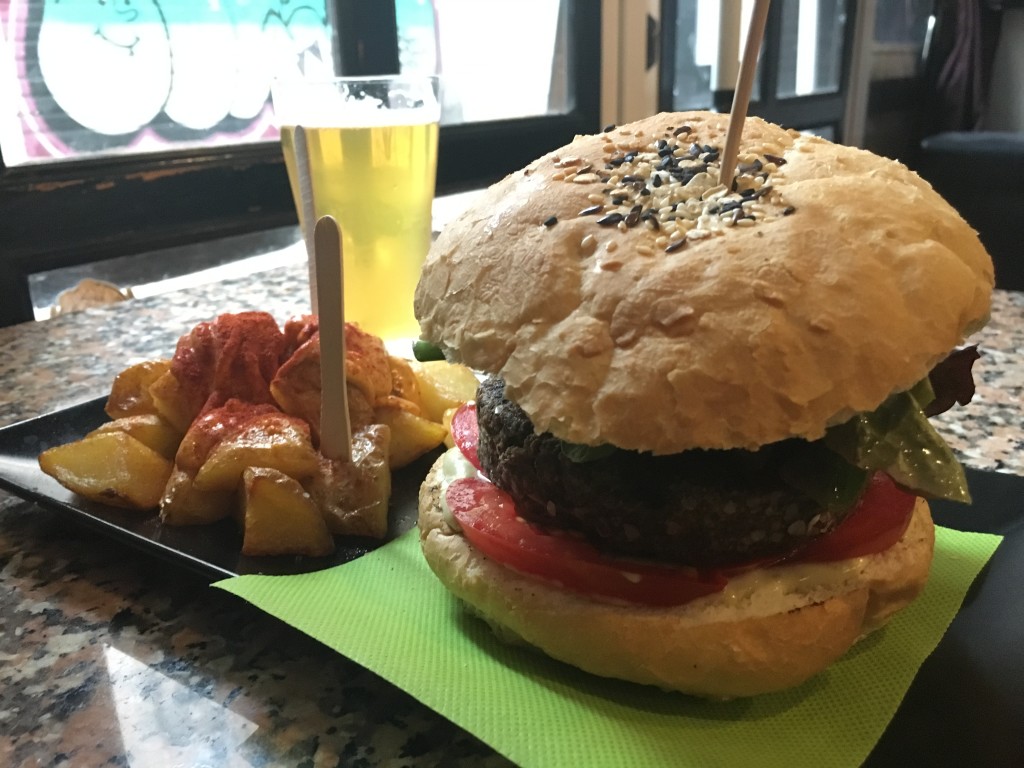 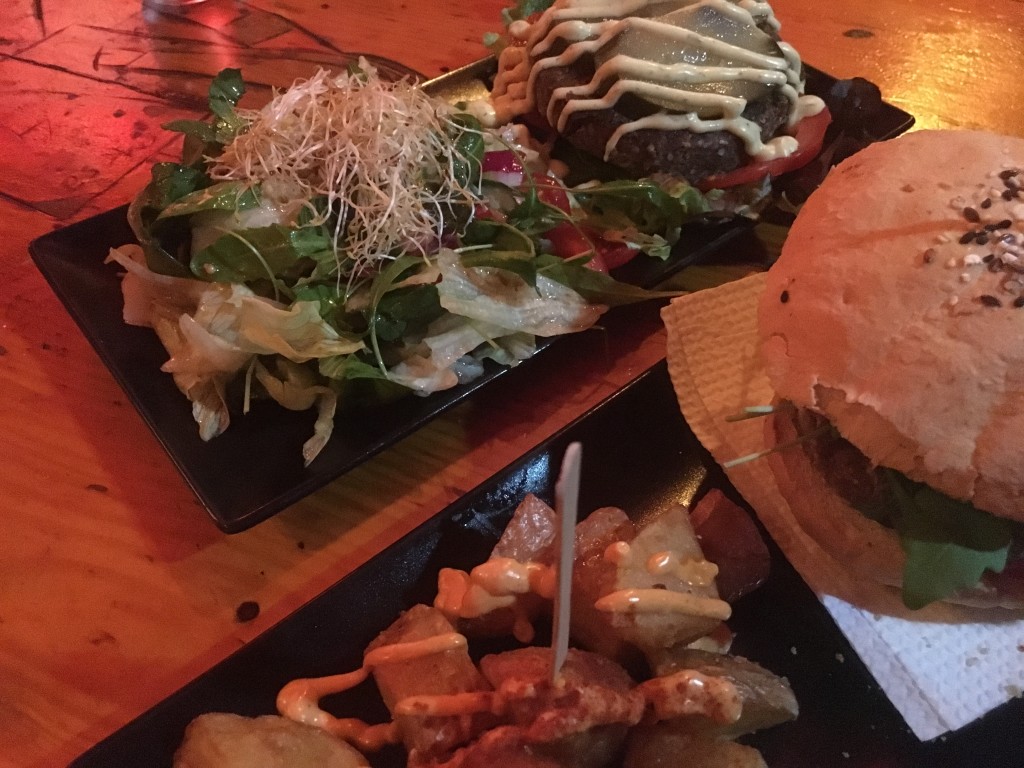 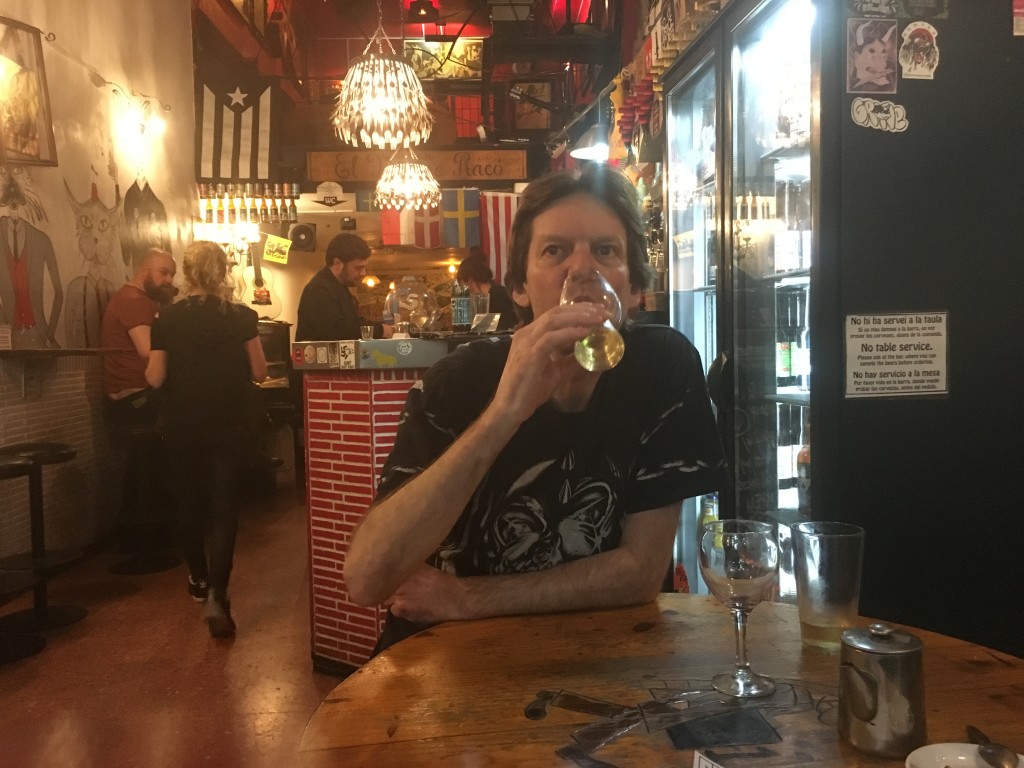 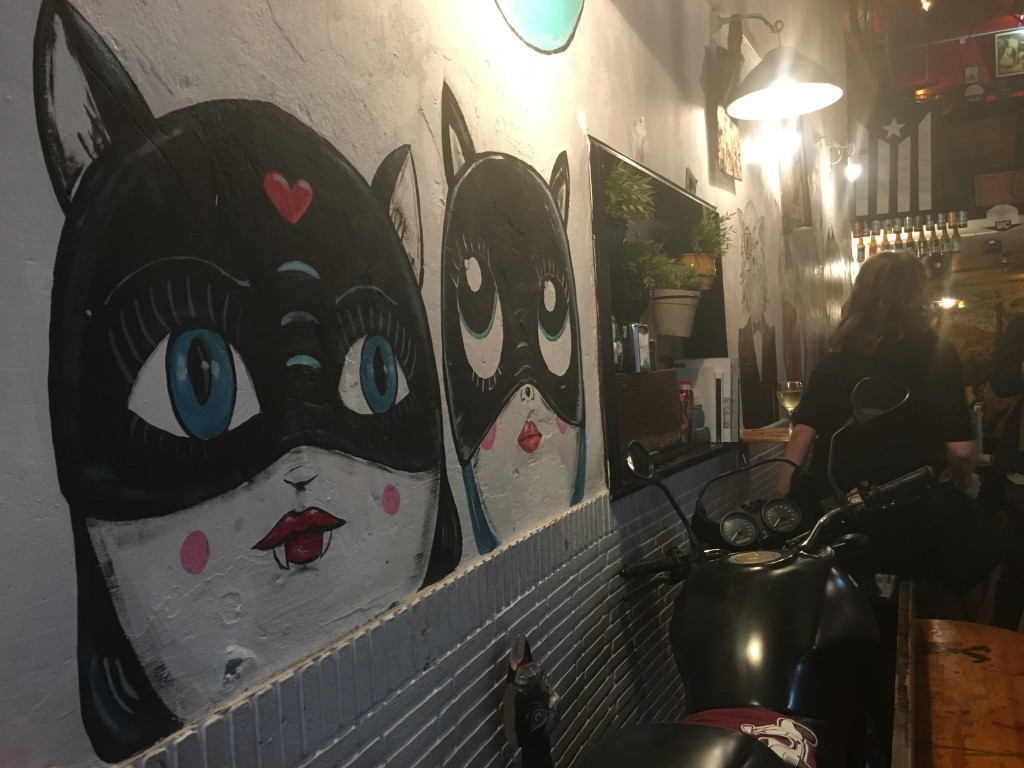 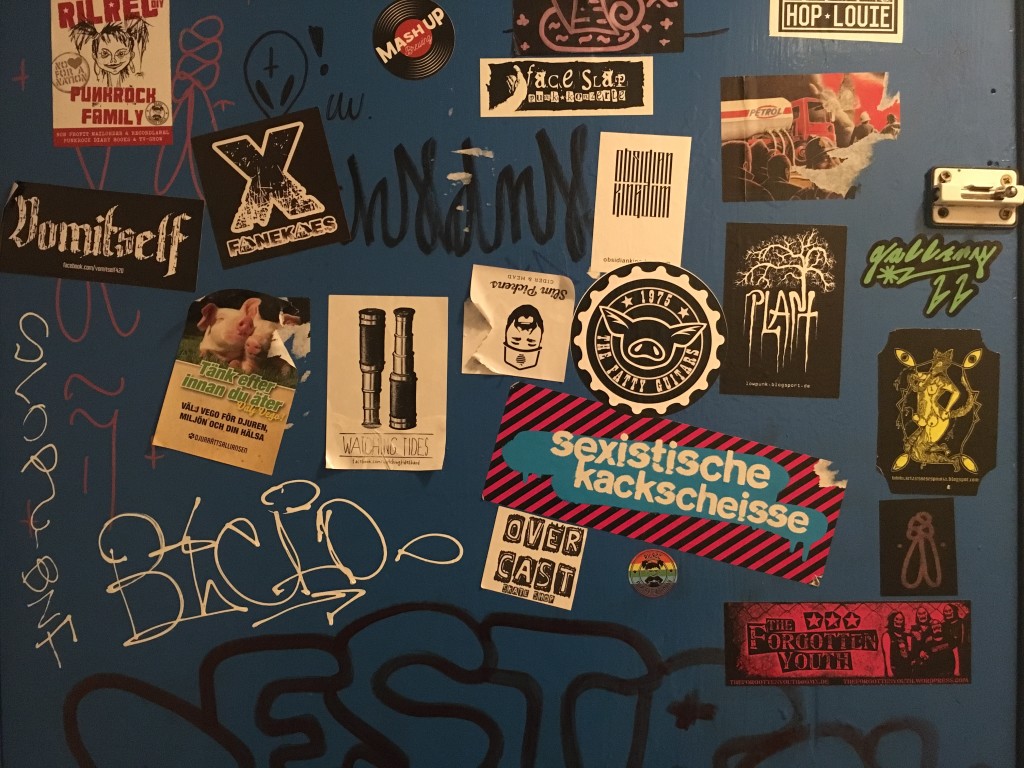